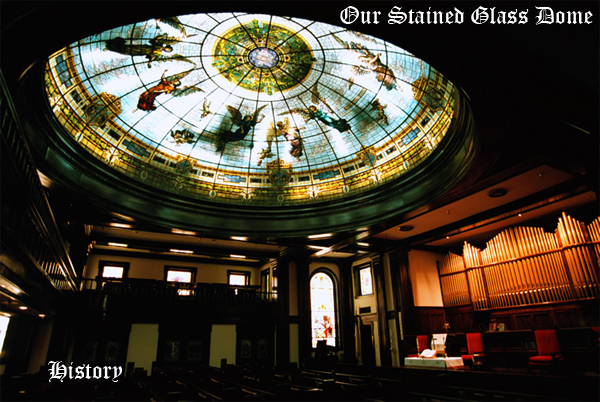 The most striking feature of the interior, however, is the art glass dome, 34 feet in diameter and nine feet high, which illuminates the sanctuary from above. It is built in 109 sections and contains, in all, more than 30,000 pieces of glass. Invisible from the outside of the church, the dome is artificially lighted from behind by an elaborate series of electric bulbs. The glazing of the dome arches up from a broad, denticulated entablature of mahogany and beyond a geometrically-patterned border, depicts angels and cherubs floating in ethereal space.
Colonel Lycurgus Breckinridge Musgrove gave the stained-glass dome to the church in memory of his mother, Elizabeth Cain Musgrove. Spared in the 1974 tornado, the blue angels and cherubs continue to inspire the congregation. There is a protective sheath around the dome, and although the daylight appears to come through the glass, it is due to electric bulbs.
Interesting to note is that the donor of the land and the beautiful dome of the Methodist church was not a member. He had been turned out 'for attending a dance which was not in accordance with church doctrine'. He never rejoined but continued to attend and support the church. When the present edifice was began, plans called for bricks. However, he gave the difference for the Georgia marble. The dome was made in Kansas City and cost $10,000 in that day. It was given in memory of his mother, who died in 1917. He delighted in filling the church with lillies every Easter.*
Needlepoint kneeling cushions installed at the altar rail in 1972 repeat the colors and some of the motifs of the art-glass in the dome.
Except for the repairs necessitated in the wake of the 1974 tornado, the sanctuary has remained structurally unchanged since the 1920s.
* from an article in the Feb. 16, 1967, edition of the Daily Mountain Eagle